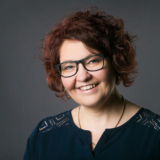 Liis has a Master’s degree in Pedagogics from Tallinn University and has undertaken marketing and management refresher training. She has worked in the field of communications in a number of organisations, including Swedbank and Billy Graham’s Evangelic Association, for which she organised festivals in Estonia, Latvia and Lithuania. She has also been the administrative manager of the NGO The Village of Hope and the Estonian Christian Pentecostal Church (known by its Estonian acronym EKNK). She has been a member of the Management Board of the EKNK.

In addition to the professional projects she has launched and overseen, Liis has also worked for many voluntary organisations, helping to re-establish the EKNK Paldiski congregation, for which she has also served as a Management Board member.

Liis with husband Viljam Borissenko and their daughter are members of the EEKBL Oleviste congregation.

In 2015, Viljam and Liis took a Family Recovery course at Dunklin Memorial Camp in Florida in the United States in order to grow on a personal level and gain new experiences. They have run courses on these topics and have offered couples counselling to families in need of help.